The Cross-Country season got under way in earnest in Galbally last Sunday with the County Novice Cross Country Championships down for decision. The local club, Mooreabbey Milers, as usual had a very good course well laid out. Conditions were ideal with warm sunshine and firm underfoot the order of the day. In the Novice women’s 4k race the Club had six athletes competing and it is great to report that they all ran very well. The race started over four laps and midway through the first lap Suzanne Shine had moved up to 2nd place and was running strong. She maintained that strong pace and gradually closed the gap on the leader, then at around the one-mile mark she was sharing the lead and by the time they came around to the halfway mark she had moved into the lead. She maintained that strong pace that saw her open up a commanding lead over the 2nd part of the race to win very convincingly in 17 mins 16 secs. This was a brilliant performance by Suzanne as she judged her pace perfectly, she didn’t panic with the fast tempo at the start but used all her experience to gradually reel in the leader and was able to maintain that steady pace to be crowned Champion. Suzanne joins the calibre of athletes like Carmel Delaney (2000), Aideen Rigney (2002), Linda O Connor (2006), Aine Roche (2007), Angela McCann (2008) and Ciara O Neill (2020) as County Novice Cross Country Champion, an elite list of achievers. This was a just reward for all the training she has put in, especially over the last few months.

While Suzanne was running a brilliant race up front this gave our other club members a great lift and they all began to produce great performances. None more so than Sarah Whelan who was 5th in the early stages of the race but as the race unfolded Sarah made brilliant progress especially in the middle part of the race as she moved up in bronze position with a mile to go and kept that pace going all the way to the line to win the bronze medal in 18 mins 20 secs, brilliant running. Then we had Sareen Walsh also running a brilliant race over the 2nd half of the event to finish a very good 4th in 18 mins 39 secs and along with Suzanne Shine and Sarah Whelan won the Inter Club title on eight points. Thus regaining the Club title last won in 2020 in Newport.

Michelle Doherty is another athlete running very well at the moment and as the race unfolded, she came through very strongly especially over the last mile when finishing 5th in 18 mins 50 secs. We also had great efforts from both Jennifer Quinlan 9th (20:11) and Stephanie Byrne 10th (20:47). This trio, Michelle, Jennifer and Stephanie combined very well to win the Inter Club Silver medals, it was fantastic to see all the hard training over the past couple of months paying rich dividends for this group of athletes in Galbally last Sunday and augurs well for the future. Congrats to both Jennifer and Stephanie for winning silver medals at this level for the very first time.

In the Men’s race we had a team competing. Here we saw Joey Feery run a very good race in what was a very competitive and fast race over the six laps. Joey went out strong and was well positioned throughout the race. He kept it going to finish a very good 5th in 22 mins 54 secs, brilliant to see Joey running so well again. We also had good performances from Niall O Ceallaigh 30th (26:38), Michael McNamara 33rd (27:14) and Liam Casey 39th (29:43) with the club team finishing 7th. 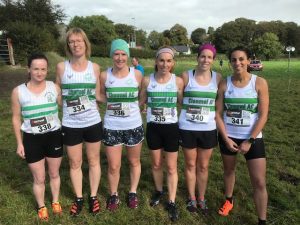 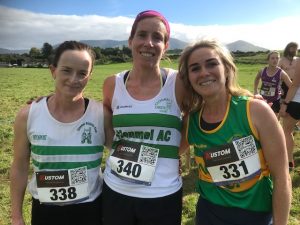 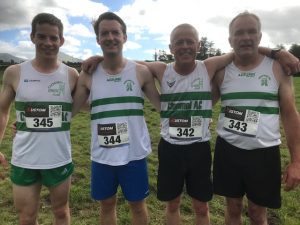 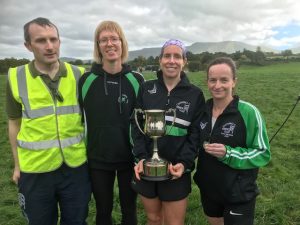