Dunshaughlin was the venue last Saturday night for the Michael Manning 10K road race. This race attracted a top-class field, as the ad would say, probably the best 10k race in Ireland so far in 2022. The race was won by the extraordinary Efrem Gidey in record time but three Clonmel athletes finished in the top ten finishers with outstanding performances. William Maunsell in 6th place overall continued his recent good form with a time of 30 mins 1 sec and just outside the magical half hour. He also continues to hold down a prominent position in the Kia series. David Mansfield was next in 9th position with a new PB run of 30 mins 16 secs a huge improvement on his previous best dating back to Dundrum 10k in 2019. Evan Fitzgerald in 10th place showed no ill-effects from his magnificent silver medal winning performance in the National 5-mile championships six days earlier, coming home in a new PB of 30 mins 19 secs. Indeed, it was also nice to see another Tipp man, Kevin Moore of Dundrum finishing in 12th place in 30 mins 28 secs. Not many counties could boost about having four athletes under 30 mins 30 secs for this Classic distance. With such a talented group of athletes, they would form the basis of a very strong County team in any event, brilliant to see. Also, worth noting that Brian Maher of Kilkenny City Harriers, a regular participant in our St Stephen’s Day promotion over the years ran a new National over 40 time of 30 mins 5 secs. Overall, it was great to see our athletes running at the highest level and acquitting themselves so well. 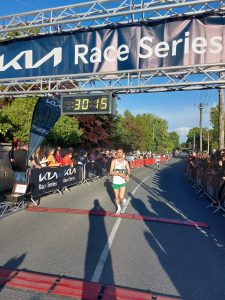 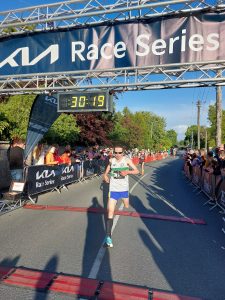