The County Novice B Cross Country Championships were hosted by the Moyne Club in ideal warm weather conditions. In the women’s race the early pace was set by a group of athletes that included Sareen Walsh with Brid Hearne in the chasing pack and Marian Flaherty well positioned in the middle of the race. As the race unfolded the leading group was down to two athletes with Sareen Walsh sharing the lead with Maire O Shea of Mooreabbey Milers. Then over the closing stages Sareen kept the tempo going to win the silver medal in very convincing fashion, a brilliant performance by Sareen who has been making great progress during the Cross-Country season and this was her best performance over the country and a just reward for all the training. The battle for the bronze medal saw Brid Hearn move into contention midway through the race and with about 1km to go she moved into 3rd place and push on in great style to win the bronze medal. This was a brilliant performance by Brid who only joined the Club earlier this year and has made great progress in that short period of time. This performance by Brid was her best this year and a great reward for all the training she has done, to win her first individual medal, brilliant. Then we had Marian Flaherty also running a well-judged race which saw her make great progress over the closing stages when finishing strongly in 7th place. This was Marian’s best performance this year and a great reward for her perseverance after a lengthy lay off due to injury. This trio combined very well to win the gold medals and the Cup very convincingly.

In the men’s race our sole competitor was Donie Casey and he too ran well when finishing 20th. 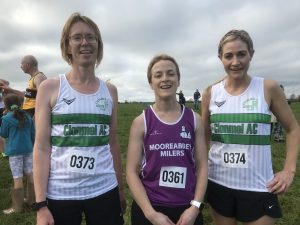 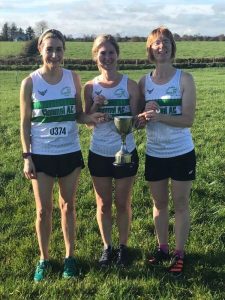