Club members made the short journey to Ballyneale last Sunday for the County Intermediate Road Championships. Once again it is great to report that the Club was very well represented with 6 athletes in the Women’s 4k and 13 athletes in the Men’s 8k race. In the women’s race Cailin Napier, making her debut in these Championships went with the early pace and soon found herself in the leading group of three athletes as they approached the 1st km. She was full of running at this stage, despite the very warm conditions and was still in contention as the leaders came back into the village. In a hectic surge over the final 200m, Cailin rallied well to win the Bronze medal in 15 mins 45 secs, her first Senior Individual medal, hopefully the start of a great career as she moves into the Senior ranks after a very successful Juvenile career. Then we had Aisling English running a PB when putting in a very strong effort to finish 4th in 16 mins 36 secs, great to see Aisling running so well. Jennifer Quinlan, a newcomer to the Sport has taken it by storm and she kept that great form going when finishing 6th in a PB of 17 mins 33 secs. Our team of Cailin, Aisling and Jennifer combined very well to win the gold medals and were crowned County Intermediate Club Champions for 2021, brilliant achievement considering this was a completely new team winning this title with all three members winning their first Intermediate Gold medals. The last time we won this County title was in Faugheen in 2018 an don that day the winning team was Clare Annan 1st, Suzanne Shine 4th and Anne Marie Boland 6th, so well done to everyone who helped to bring this title back to the Club.

We also had great performances, despite the very warm and humid conditions from Sareen Walsh 8th 18:10, Anna Byrne 9th 18:23 and Radka Holaskova 13th 19:26. They were piped for the Bronze medals by a good Carrick on Suir team, losing out on count back.

This set the scene for the men’s 8k race as we also had a strong squad competing in this race. Right from the Start Paul Minogue made his intentions known by setting a strong pace that soon had the leading group down to two athletes, himself and Aaron O Donnell of Carrick on Suir. These two athletes soon drew clear of the chasing pack and as they past the finish line with a lap to go, the Gold medal was between these two athletes with Aaron slightly ahead of Paul. As the race reached the last mile Paul made his move and went into the lead. He held that lead all the way to the line to be crowned County Intermediate Champion, his winning time was 26 mins 11 secs. This was a brilliant performance by Paul who was winning his first County Individual title, well earned as he has trained well over the past couple of years and great to see all the hard work paying off. Then we had Nigel O Flaherty also running very well when finishing 4th in 27 mins 52 secs. At this stage it was all to run for in the Inter Club team event with Carrick on Suir, Mooreabbey Milers and Clonmel having 2 athletes each in the top 8. As the athletes came back into view, Cormac Healy was chasing down two Mooreabbey Milers athletes and he gave it everything, passing one of them close to the finishing line when finishing 11th in 30:16. This was by far his most impressive performance for quite some time as he set a PB for this distance. Then we had Joey Feery also running on very strongly over the final mile when finishing 13th in 30 mins 34 secs. These four athletes, Paul, Nigel, Cormac and Joey combined very well to win the Gold medals and are crowned County Intermediate Club Champions for 2021, brilliant running all round. Looking back on the Club records, Ballyneale was the venue in 2012 when we last won this title and on the 28th February 2012 our winning team was Stephen Hunter 5th, Vasiliy Neumerzhitskiy 7th, Valerin Thzcoin 9th and Eoin McGrath 10th. So well done to everyone on helping to bring back this Cup to the Club for another year. We also had great running from Eelco Beckers 22nd 32:20, Anthony Power 24th 32:56, Pat Coffey 28th 34:04, Sean O Dea 29th 30:10, Vincent McHugh 30th 34:38, David Lorigan 31st 34:58, Kenny Brett 33rd 35:42, Wojek Ryzinski 34th 36:25 and Noel Howley who ran very well when finishing 37th in 42:04. It was great to see so many of our members running so well in such trying conditions and a great day for the green and white colours. 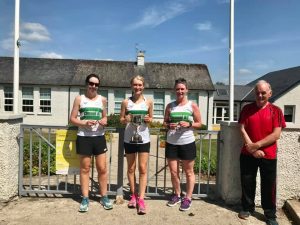 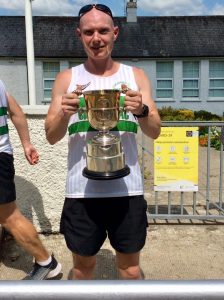 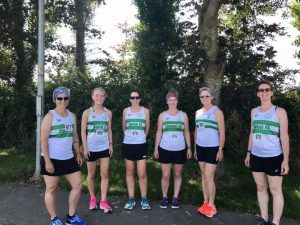 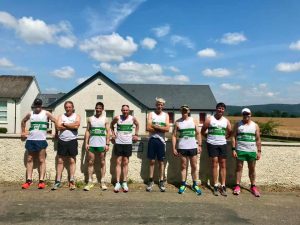