Galbally was the venue last Sunday for the County Intermediate women’s and men’s Cross-Country Championships. Great credit to the Moroeabbey Milers Club for having everything in place, even summer like conditions for Cross Country, it felt like a run in the park in the middle of the summer.

The women’s race over 5k consisted of one small lap and three big laps and it was great to see five members competing. Right from the start a group of three were setting the pace as the leaders headed out on the first of the big laps and that group included Moya Whelan making her Senior debut for the Club and making a very welcome return to the Club after being a prominent Juvenile member a few years ago. This group were still setting the pace after 2k. Then going out on the last lap Moya went to the front and the leading group of three also included Suzanne Shine who made great progress on the 2nd lap to join the leaders. Then with 1k to go Moya increased the pace and from there made every step a winning one as she came home a very worthy and convincing winner. What a start to her Senior career – County Intermediate Champion, fantastic. Then we had Suzanne Shine also running a brilliant race when winning the bronze medal on her first Cross Country outing this year, brilliant. While all this was going on at the front of affairs, it lifted the performances of our other members competing. None more so than Elaine Horgan who ran a brilliant race especially over the final 2k when finishing a brilliant 7th. Again, this was Elaine’s first outing this year and her loyal band of followers were there to cheer her on every step of the way. Then we had very good performances from both Sareen Walsh and Anne Marie Halpin who finished 13th and 15th respectively. Our team of Moya, Suzanne and Elaine combined very well to win the Inter Club title and win back the title last won in Moyglass in 2018 with Anne Marie Boland, Mercedes Martinez and Michelle Doherty.

The Men’s race also saw five members competing in the glorious sunshine. Here Paul Minogue was trying to join a select few athletes who won both the County Novice and intermediate Cross-Country titles in the one season. Indeed since 2000 William Maunsell is the only other Club member to achieve such a feat. Paul made his intentions known from the start as he set the early pace that soon saw him build up a commanding lead on the chasing pack of four athletes. He maintained that strong pace all the way to come home a very worthy and convincing winner, a brilliant piece of front running, fantastic performance. We also had good performances from Barry Horgan 31st, Michael McNamara making his Cross-Country debut 35th, David Lorigan 38th and Donal Casey 40th. The Men’s team finished 5th in a very competitive team event. 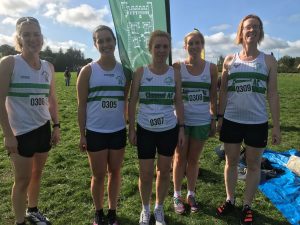 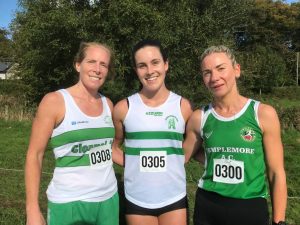 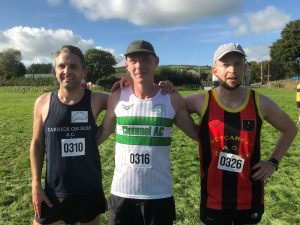