Many thanks for your entry into the Morrison BMW 6k Inter Firms Road Race Series and the very best of luck to your team in the event. The Club would also like to thank Morrison BMW, and Gary Morrison in particular, for their very generous sponsorship and continued support of this popular event series.

The race series will be run over four consecutive Wednesdays, commencing on April 6th. The first three races will be considered to decide the team placings, with spot prizes awarded on the fourth evening based on finishing positions in that race. As the competition is based on predicted times, watches are not allowed on the first three nights, but runners are free to wear them for the final race. Any runners wearing watches in the first three races will result in their team being excluded from the competition in the determination of prizes.

On completion of the first race, teams will be split into divisions based on how close the team were collectively to their predicted time. The closest three runners to their predicted time in each team will be considered for this purpose. As such, the divisions are not based on current fitness or athletic ability, but rather on the team’s ability to accurately predict their finishing times. In each division, the team closest to their predicted time after three races will be declared the winner. A further team prize will be awarded, in each division, based on the best team performance in an individual race over the first three nights. The division winner is excluded from eligibility for this prize.

Presentation of prizes will be held in Mulcahys, Gladstone Street, on Wednesday 27th April at 9.30pm. Refreshments will be provided.

To complete your team entry we are requesting all captains to collect entry fees for your team and pay the full team price of €125 using the following payment link:

It is important that the email address you enter on the payment corresponds with the email address used to submit your team details; this will allow us to match your payment correctly against your team. Online payment for the team in full will reduce the administration burden while also ensuring a non-contact solution, which safeguards us all, in light of the continued prevalence of Covid-19. We have partnered with Stripe, a recognised and secure payment provider, and as such, Clonmel AC do not retain, or have visibility of, your card details. Please note also that the administration fees associated with your entry will be paid by Clonmel AC.

On successful completion of your payment, the organisers will send out race numbers for the team to the captains for further distribution. Each number is unique to the individual team member and must be retained for use in each of the four races.

Each captain is asked to enter the predicted times for their team members on an Excel sheet that must be submitted by the Monday evening preceding the race. Therefore, predictions for the first race on Wednesday 6th April must be submitted to [email protected] by Monday 4th April. Where a team captain does not submit a prediction for the first night, the team will automatically be excluded from winning a prize in the competition. The Excel sheet for your team is attached. For the second and third races, where predicted times are not submitted, we will automatically use the times from the previous race.

The race will start just after the entrance to Minella Hotel from where athletes will run out the Coleville Road staying on the left hand side turning left at Sir Thomas’s Bridge and over Ferryhouse House Bridge and out onto the Waterford Road. Athletes will run towards Clonmel keeping left before joining the Blueway at Carey’s Slip where they will complete the final 2km on the beautiful Blueway finishing at the back of the Dog Track. The race will commence at 7pm sharp and will not be delayed for any reason to ensure both the safety of all runners and adequate daylight to complete the course. Runners are asked to please park in the free car park at the Gashouse Bridge at the following link:

This car park is adjacent to both the start and finishing points.

Further points of attention are as follows:

Once again, Clonmel AC would like to thank you for your participation in the Morrison BMW 6K Inter Firms Road Race Series. The support and co-ordination by the Team Captains is much appreciated and will facilitate the smooth running of the event. If any further clarification is required, please email [email protected] and we provide any additional answers necessary. 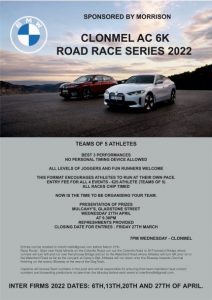