The cross-country fixtures which are coming thick and fast, continued today with the Munster Intermediate women and men making the trip to the lovely village of Castlelyons just outside Fermoy in Co. Cork. The Club was well represented in the ladies’ race with a formidable team of six athletes. After enduring the cold wind and rain in the Munster Senior last week the ladies welcomed the run in the late autumn sunshine today. From the high of winning the Eyeries 5-mile road race yesterday, it probably should have come a no surprise that from the gun Clonmel’s Hannah Steeds would take up the running as she instantly went into a 10-metre lead from Anne Marie Connellan of Ennis Track.

Suzanne Shine at this point of the race was the second Clonmel athlete just holding her ground in the middle of the main pack. Brid Hearne was well up the field continuing her good form and powering on, in her first season for the club. We then had Sareen Walsh, Marina Quinlan and Jennifer Quinlan all packing and working hard together for the team.

As the race progressed into its second lap of the 5k course, it became very clear that Hannah Steeds was a class apart in this field as she put on a very impressive show of front running extending her lead with every stride. It was a real source of pride for this Clonmel AC member, to see such a commanding performance by Clonmel AC lady in this grade of cross country as Hannah powered through the finish line. We then turned to the team and Suzanne Shine showed her tremendous strength by picking off some really good athletes to finish second club lady home in 7th place, Suzanne is showing great consistency this year in all the Cross-Country races and brilliant to see all the hard training paying off. Our third lady home was Sareen Walsh. Sareen showed her vast cross-country experience by easing her way through the field when finishing strongly down the finishing straight in 12th place. She was ably supported by Brid Hearne who had a fantastic run and was our fourth lady home when finishing 13th. This was Brid’s best performance this year in Cross Country and she has shown great progress since her first outing in Newport at the start of October. These four Clonmel athletes combined to win the Munster Silver team medals losing out of the gold medals by just one solitary point by the Ennis Track club. This was Brid’s first Munster medal and richly deserved. Then the combined talents of Hannah, Suzanne and Sareen along with Sharon Cantwell of Moyne won the Inter County silver medals. Today’s performance by our ladies is a continuation of the unprecedented season they have put in and it is a credit to all involved.

While it was a little bit disappointing that we could not field a men’s team today it was always going to be a race too far for many of our male athletes as they have run several back-to-back races and have major National events looming in the coming weeks which we look to with great anticipation. Michael McNamara was our only starter today and Michael acquitted himself extremely well in this very competitive race which was won by this year’s Munster novice champion Liam Harris. This is Michael’s debut season for the club and he is a welcome addition with a great running future no doubt and he showed a great turn of pace at the end to finish 33rd. Well done to everyone who has represented the club in the past few months it is great to see the green and white out in force in this our 50th year. 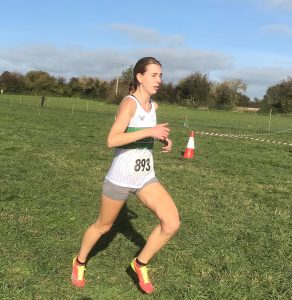 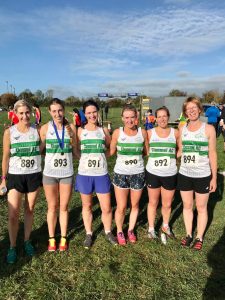