Tullamore was the venue last weekend for the National Track and Field Championships where conditions were dry with a breeze down the back straight. Evan Fitzgerald competed in the National Senior 10000m race. The very best distance athletes in the country -north and south- assembled and a truly cracking race unfolded. The race was a real Championship affair with the lead changing several times over the twenty-five-lap race as athletes were covering every break. Then just after halfway a group of nine athletes, including some Irish Internationals as well as Evan moved clear and every position was hard fought for over the remaining laps. Evan Fitzgerald put in a terrific fighting performance to finish in a hugely impressive 7th place in 31min. 22 secs. This was an incredible performance by Evan in the Club colours and a PB for him over this Classic distance on the track, indeed this is his first time competing over this distance on the Track and it augurs well for the future. It is great to see Evan running so well at the moment as this performance follows on quickly from his great run the previous weekend at the same venue in the National 5000m where he finished 4th. Evan is having a great season at National level this year so far, winning the National Intermediate Cross Country Championships in Castlelyons last February, Bronze medallist in the National 5K on the road last month and now two great performances on the track. 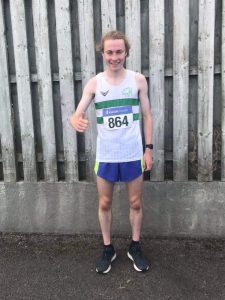