Last weekend saw the start of the National Juvenile Track and Field Championship held in Tullamore. Seven of our athletes were competing over the 2 days of competition. On Friday evening Sam O Sullivan went to the start line of the u17 boys 3k walk and after 7 and a half laps of the track in gruelling conditions came home with a Silver National medal in a time of 14 mins 26 secs. Next up was Ivy Rhatigan competing in her first National competition in the Girls under 14 2000m walk. She put in a fantastic performance to finish 8th in 12 mins 21.07 secs. Later that evening Grainne O’ Connor no stranger to competing for National medals put in a stellar performance but finished just outside the medal positions in 4th.

Saturday saw day 2 of the championships and here we had Gillian Hughes competing in the girls under 19 800m and putting in a super performance to place 4th just missing out on the podium by less than half a second in 2 mins 25.32 secs. Then up next was Muireann Duffy in the girls u18 3000m and she ran a fantastic race lowering her PB by 17 seconds on her winning Munster time, unfortunately she finished just outside the medal positions in a very competitive race placing 5th in 10 mins 32.73 secs. In the girls under 19 3000m Emma Murray ran an almost identical race to again lower her PB and place 5th in 11 mins 3.42 secs, what a performance.

Our final competitor of the day was Cara Ryan competing in the girls under 12 long jump. So impressive was her Munster winning jumps that she must surely have been the favourite going into this competition. She lived up to her billing winning the competition and was crowned National Champion of Ireland with a jump of 4.64m. Cara now adds a National title to her long list of accolades which include provincial indoor and outdoor records. Had the conditions not been as bad I feel the National record may have fallen.

What a performance by our Juvenile athletes, we are all so proud of your achievements. 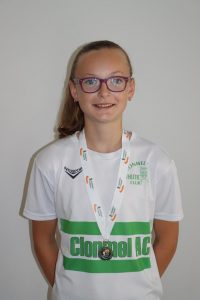