The Club made the short trip to Ballyneale for the County Intermediate Road races last Sunday. Conditions were good and it was great to see the Club well represented in both races. The women’s 4k race saw seven members going to the start. The pace was strong from the start, then midway through the race, Suzanne was sharing the lead and was running well. Suzanne maintained that strong pace to win the silver medal impressively in 15 mins 34 secs, this was a brilliant effort by Suzanne, and it is great to see all the hard training paying dividends. Then we had Aisling English and Caroline Godard putting in two great performances over the closing stages when finishing 4th (16:31) and 5th (16:39) respectively. These three athletes combined to win the Inter Club silver medals just losing out on the gold medals by one-point, great running. Then we had Jennifer Quinlan also running very well when finishing 7th in 17 mins 30 secs with Michelle Doherty finishing 8th in 17 mins 42 secs. Then we had Sareen Walsh also running very well when finishing 10th in 17 mins 56 secs and these three athletes combined very well to win the inter Club bronze medals. We also saw Marina Quinlan also running well when finishing 15th in 18 mins 45 secs, brilliant performances all round. 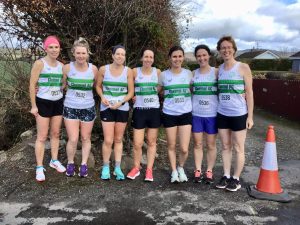 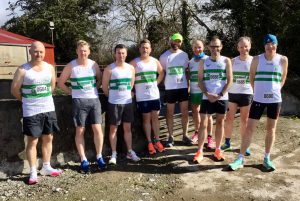