The Rome Diamond League took place tonight and it was brilliant to see the Club singlet displayed by Sean Tobin who put on a phenomenal performance. Sean was tasked with setting the pace of 60 seconds per lap for the first 4 laps to set up the perfect pace so that records could be broken. Sean set about his task with great determination, going to the front right from the start and soon had the whole field in Indian file as he set a strong pace, going through 200m in 30 seconds and he kept that level pace going, reaching 400m in 59.6, 800m in 1 mins 59 seconds and 1km in 2 mins 29.55 secs. At this stage, the top three athletes were on Sean’s slip stream as he turned out a solid performance and bringing them through 1600m in 4 mins 1 secs, perfect pacing. This fantastic performance by Sean where he kept the pace even throughout the 4 laps, set the race up for a brilliant finish. So much so that the commentators raved about his performance afterwards as the perfect pace setter for such an event. As such the race organisers were handsomely rewarded with Jacob Kiplimo from Uganda getting the better of Jacob Ingebrigtsen of Norway in the closing stages to win in 7 mins 26.64, a National record as well as the world best of 2020 and a Personal best by 17 secs while Jacob Ingebrigtsen set a National record and a PB. In 3rd pace was Stewart McSweyn who set a new Australian record while the 4tf place finisher was Yeman Crippa of Italy who also set a National Record that was set in 1996. Looking down through the rest of the field, there were four more athletes who set PBs while 3 other athletes set Seasonal Best. Throughout the race it was great to hear the raw reviews that Sean got from the commentators such as Steve Cram as he produced a strong even pace for the first 4 laps that set the rest of the field up for brilliant performances, well done Sean. 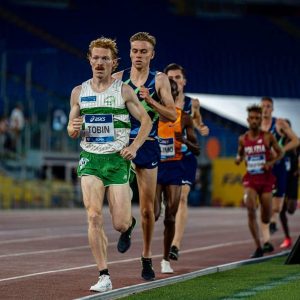