Metz will always be a lasting memory for Sean Tobin as on 6th February 2021 he produced a phenomenal display to win his first Senior race on the International stage in the 3000m race. This was just pure class. The race over 15 laps had a strong entry. The race started and Sean went out strong and placed himself in midfield, close enough to the leaders to cover any sudden move. The 1st km was reached in 2 mins 36.8 secs and Sean was running smoothly. Then with 1200m to go Sean moved up to 5th and reaching 2k in 5 mins 14.1 secs. At this stage, the pacemakers were gone and it was down to the top five including Sean as to who would be the winner. Then just after the 2k mark Sean moved effortlessly up to 3rd place ready to cover any sudden change of pace. He made his next move as the leaders approached the 2600m mark and he moved into the lead. Here he showed all his experience of competing at the Indoors in America when he sustained a strong tempo over the next 200m ensuring that no one would overtake him and then he capped it all off with a blistering surge down the back straight for the final time to open a commanding lead which he held all the way to the line to win in a brilliant time of 7 mins 48.01 secs, phenomenal performance. This fantastic performance by Sean saw him set a new Personal Best for 3000m indoor and well inside the qualifying time of 8 minutes for the European Indoors later this year.

This performance also put him among the greats of Irish middle-distance athletes over this distance as he is now ranked 7th in the All-Time Indoor standings in the company of such talented athletes as Frank O Mara, Eamon Coghlan, Marcus O Sullivan, Ray Flynn and John Treacy. This performance by Sean should put a pep in the step of all Club members, indeed all athletes as they train in these unchartered times. Only a few weeks ago Sean was training on the highways and blueways of his hometown and to be able to go out and mix it with the best speaks volumes, fantastic performance. This confident win by Sean will surely see him in demand as race meet organisers will be overly impressed by this authoritative performance.

Commenting on this brilliant performance by Sean, Tony McCarthy, Clonmel AC Chairman, said that this was a very impressive and commanding performance by Sean and a just reward for all the hard work he has put in in recent years. This is the best performance by a club member and we are proud of such a performance, indeed it is one of the best, if not the best performance by a County athlete in recent years. This great performance by Sean coupled with the recent announcement that work on the World Class IAAF track facility on the Bypass will commence once the Covid ban on construction is lifted is just brilliant and it is great that we can have an athlete of Sean calibre to grace it. He now moves onto Barcelona, where hopefully the race organisers will get his nationality right, for his next race this coming Monday and all of his clubmates in Clonmel AC and indeed the wider sporting fraternity, wish him the very best of luck. 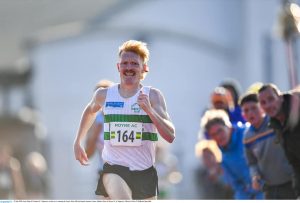