The Munster uneven age Cross Country Championship were held in Limerick racecourse today and although we had a small number of entries we came home with a large medal tally. Race numbers were large with some in excess of 100 competitors. First up were the under 11 boys and here both Fionn Aird 40th and Seamus Meegan 125th put in great performances but Tipperary placed 4th County. Next was Ryan Kennedy in the under 13 boys and he ran very well to place 57th just outside the county team that took the bronze medals. In the girls under 15 we had 3 athletes each putting in some fine performances with Hannah Murray 51st, Lily Casey 66th and Alice Meegan 74th. In the girls u17 race Meabh Meegan ran a great race to place 28th. Our first medal of the day came in the boys under 17 race when Cian Flaherty put in a brilliant run to place 16th and was on the county team that took the Silver medals. Then onto the under 19 girls and here our stalwart of Clonmel juvenile cross country running Muireann Duffy took the Gold individual medal and along with team mates Laura Cooney 6th and Ruby Carroll 10th took the Silver club team medals. These girls also combined with Emma Murray 5th in the Junior ladies race to win Silver Club and Silver team. In the final race of the day for juvenile Conor Flaherty put in a great race to place 20th and was on the Tipperary County team that took the bronze medals. As always we would like to thank all those that made today happen, the athletes, coaches and parents. In total Clonmel juveniles claimed 16 Munster medals. 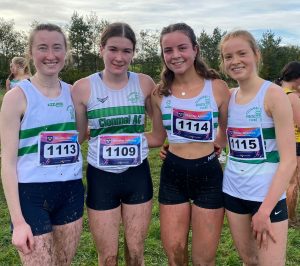