Clonmel AC was represented by John Laste (3k and 5k Walks) and Hazel Galloway (60m and 200m sprints) at the European Masters indoor championships in Braga Portugal held over the last week. Almost one hundred Irish Masters Athletes travelled for these very popular Championships which kicked off on Sunday 20th February with the cross-country events.

John was first to compete on the track in a highly competitive over 55, 3k race walk on the oval track which was won by Ortega of Spain in a time of 13 mins 39 secs. It was the Clonmel athlete’s first time competing on the European indoor scene, and he found it a very intimidating environment with every Walker coming into the event with much faster times. Having received a couple of cautions from the judges early on it took some time for John to settle in and find his tempo. Once settled, he completed the 3k in a time of 17 mins 27 secs and John can take a lot of learning from this experience.

On Saturday noon, the 5k walks were held on top of the hills and forests overlooking the picturesque city of Braga. Although it was on a mountain side the organisers managed to find a relatively flat 1k loop 500m out and back. John’s race included the over 50, 55 and 60 categories and it went off at a very fast pace with the Spanish man Ortega and French walkers pushing it out hard from the gun. John quickly settled in and went through 1k in 5 mins 24 secs, and he continued that pace through 2k, then a couple technique issues on lap 3 brought warnings from two judges so the 3rd lap was slightly slower at 5 mins 55 secs. At this stage John was into a good rhythm of that good heel/toe action and he got going again over the final stages and he finished very strong with a 5 mins 38 secs lap and an overall time of 29 mins 13 secs, a hugh personal best for the distance in a championship. After the daunting experience of the indoor cauldron John felt much more at home out in the open air and felt much more competitive. Of the thirty-five athletes that took to the start John finished 24th overall. He can look forward to the Non-Stadia European championships in May where he will compete in the 10 and 30k distances.

Hazel Galloway went into these championships well prepared after such a long time without any competition. Hazel showed at National championships recently that she was peaking at just the right time. Hazel negotiated the semi-final on day three of the championships. In her semi-final she ran 10.04 secs then on day four Hazel produced her best run over 60m this season and setting a new National record for the age category in 10.02 secs. Unfortunately, Hazel was just run out of the medals when she finished a very creditable 4th given the experience of the athletes ahead of her. A couple of hours later Hazel was back on stage to contest her 200m semi-final. One might have thought that Hazel was going to feel her earlier exertions in the 60m, but she was thinking differently, she ran a blinding race from the difficult lane six. Though she tired in the last 10m she managed to qualify in another National record of 34.88 secs and so had another final to look forward to on the Saturday afternoon. What a final this turned out to be.

Hazel was so determined not to let the occasion get to her and swore to give it everything she had. Drawn in the tight lane two, she got her usual fast start and powered into the first bend putting herself exactly where she wanted to be. She consolidated down the back straight and coming out of the final bend she was in a share of second place. Down the final stretch however, the longer stride of her opponent’s gave them just enough to pull Hazel’s lead back. Hazel’s heroic effort fell just short of a medal, but she had the consolation of shattering the National record she had set in the semi-final earlier in the week. The time of 33.68 secs was just 4 one hundredths of a second off a bronze medal and 15 one hundredths from silver. Sport can be cruel sometimes, but Hazel was very philosophical about her performances at the championships and looks forward to the world championships in Edmonton in Canada in a years’ time. Terrific attitude from an inspirational athlete.

Both Hazel and John would like to thank everyone who sent good wishes of support throughout the week. It is a real inspiration to know so many people appreciate what all the athletes are doing. 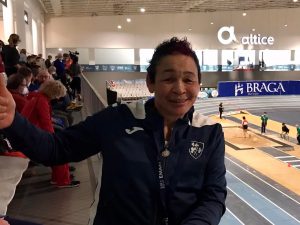