Templemore was the venue last night, July 14th, for the County Novice B Road Championships. Once again it is great to report that the Club was very well represented in both races on what was a very warm and humid night for racing. Great credit to Templemore AC for promoting two very successful races.

In the Women’s 3k race we had seven athletes going to the start and it is great to report that they all ran very well. None more so than Anne Marie Halpin. Anne Marie was well prepared for this race. The race started and soon Anne Marie found herself leading the chasing group at around 1km. She kept a good tempo going that ensured that she was in control and able to withstand any challenges. Then as they came into the town, Anne Marie increased the pace and gradually went clear to win the Silver medal in 11 mins 59 secs, a brilliant effort by Anne Marie and a great reward for all the hard training. Then we had Marina Quinlan, competing in this event for the very first time emerging out of the chasing pack at 2km and putting in a strong surge up the finishing incline when 4th in 12 mins 52 secs. She was closely followed by her sister Jennifer, who was closing with every stride when finishing a very close 5th in 13 mins 1 sec, two brilliant efforts by these debutants. They along with Anne Marie were very convincing winners of the Inter Club Gold medals, winning back the Cup, last won in 2018 by our team of Anne Marie Boland, Ailish Mansfield and Suzanne Shine.

We also had great running from Sareen Walsh who came through to finish strongly in 6th place in 13 mins 26 secs, and she was followed closely across the line by two more debutants Brid Hearne 8th in 13 mins 42 secs and Radka Holastova 9th place in 13 mins 51 secs. These three athletes combined very well to win the inter Club Silver medals. We also had Stephanie Byrne running well when finishing 12th in 14 mins 25 secs. Congrats especially to Marina, Jennifer, Brid and Radka on winning their first County medals with the Club, the first of many, brilliant to see all the hard training paying off. 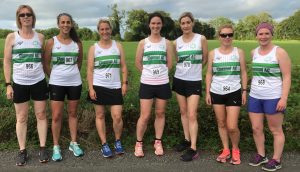 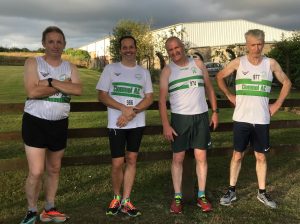